Plus M Productions is an award-winning San Francisco based video production company that produces socially-minded documentary films and video content for a range of clients, from local non-profits to international companies. Drop us a line.

Two Fantastic Screenings of The First 70

We’re fresh off two of the best screenings we’ve had so far for the California State Park documentary film, The First 70, that we did with the crew at Heath Hen Films. First, Martin Schnitzer and team at internationally recognized design firm, IDEO, threw an impeccable screening event at their brand new San Francisco office space. We packed the house with over 150 people, and even had to lock the doors after we reached capacity. The response was amazing! Popcorn was popping, wine was flowing, everyone was sporting a custom button and the film was really well received. Martin led a great Q&A session and the discussions didn’t end there, people hung around much after the film to continue discussing the importance of our parks and what can be done to save them. 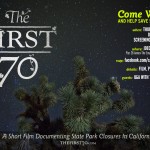 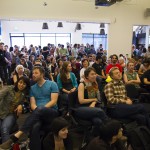 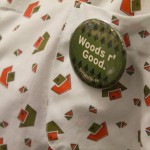 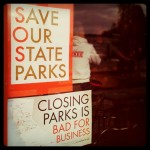 Then, last week we trekked up to beautiful Truckee, California, for the films high altitude premiere. &Work Apparel and Action Labor Collaborative top dog, Eric Wallis, produced the event along with the great crew at Moody’s Bistro. The house was once again packed, and everything went off without a hitch. We had a huge raffle with goodies given away by the great folks at Poler, &Work, AirBlaster, GoPro and last but definitely not least, Jones Snowboards. Snowboarding legend, Jeremy Jones and wife Tiffany came out to support the film and brought along a backcountry split snowboard for a giveaway. So cool!!

And by the way, if you haven’t yet checked out Jeremy Jones’ non-profit fighting the good fight against global warming, make sure to check them out: Protect Our Winters